If there are to be various World's Largest things then surely they would feel right at home in Texas.  While, I've so far been able to stop myself from beginning a blog entry with the phrase, "They say everything is bigger in Texas," it's getting harder and harder with the amount of great big stuff that populates the Lone Star state.  And with that, we head inside Pinballz Kingdom in Buda, TX to check out another great big thingamajig. 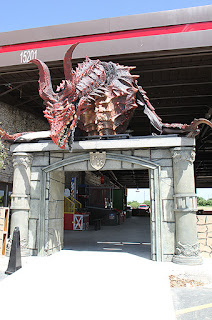 Now it's always tricky when you get into the "World's Largest" this and the "World's Largest" that.  Caveats tend to abound.  Many people play it safe by claiming they have the largest thing in the state or the country or they can even get cute and claim to have the second largest such-and-such.  But when signage is involved, you know they mean business: 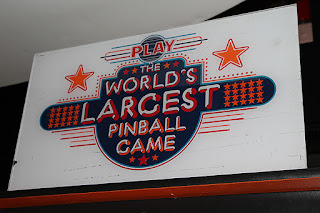 There's a lot of great pinball machines out there but there's only one that can claim to be the "World's Largest."  OK, so these were commercially produced so there's technically more than one of them out there but I this is the one in Central Texas.  Behold...the "Hercules": 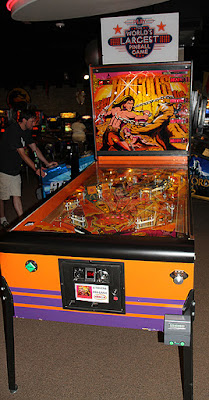 The place is full of tons of retro (and newish) pinball and arcade games but this one is the arcade's pride and joy and is positioned right in the center of the action.  In the interest of full disclosure, the Folks at Guinness claim that this machine in Italy is the real World's Largest but that location probably doesn't have the old Teenage Mutant Ninja Turtles arcade game like Pinballz does so I'll head to Buda the next time I want to sink some quarters.

Posted by Esteem Education Co. at 8:28 AM No comments: 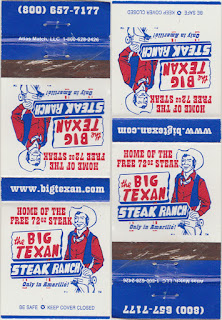 If you're reading a blog about Texas Pop Culture then you're probably already aware of the Big Texan Steak Ranch in Amarillo. What you may not be aware of is the 2002 film Waking Up in Reno.  In it, a quarter of fairly obnoxious couples go on a road trip and like the best road trips, they make a stop at the legendary restaurant. 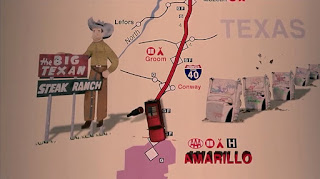 This wasn't just some quickie lip service about a famous roadside Route 66 attraction that was actually shot in some Hollywood sound stage.  The production filmed scenes at the actual legendary destination. 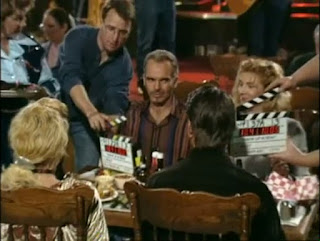 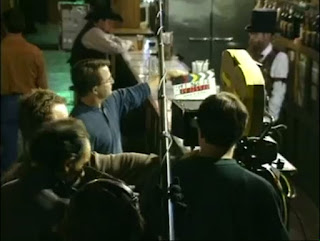 Billy Bob Thornton is one of the stars of the film and the Big Texan scene is pretty much what you'd expect.  But before we get to the inevitable "full belly" situation, a true Amarillo legend makes a cameo in the film.  If you've been to the restaurant, you've no doubt met Hodie Portfield.  He appears in the film in his trademark animal skin outfit: 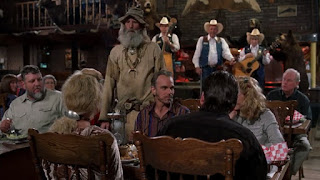 Well, as you can imagine, Billy Bob takes on the Big 72 Ounce Steak challenge and succeeds!  And while he didn't do it in real life, fictionally eating the 72 Ouncer can go on his Texas Resume alongside fictionally fighting in the Alamo. 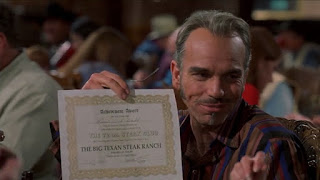 As often happens in real life, four and a half pounds of beef was a little too much for Billy Bob's character and things get a little out of hand.  As you can see, Hodie steps in to help out, which I assume would also happen in real life:

So the next time you head up to Amarillo, let Billy Bob's story be a cautionary tale:  there's no need to try to eat that much food in one sitting.  But it you can do it...it's free!


Posted by Esteem Education Co. at 2:43 PM No comments: 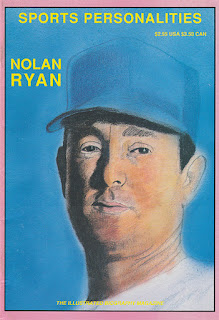 The comic book medium has never been shy about branching out from superheroes to other genres.  That frequently includes biographies and as we saw with the Tom Landry comic, Texas sports heroes tend to have interesting lives.  So with that, we take a look at the Personality Comics issue from 1991 that chronicled the life of baseball legend Nolan Ryan. 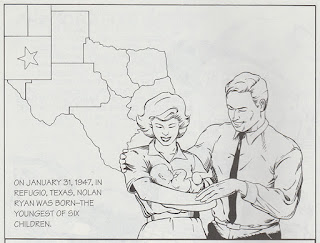 As biographies tend to do, this one starts with Ryan's birth in Refugio, TX and his childhood in Alvin, TX as well as his time as a student athlete playing basketball and his love of baseball.  As a young man his talent was clear and the book covers his recruitment by the Met's farm team:

I couldn't tell you why that scout looks so sinister.  Maybe because he's from New York?  Like all ball players, Ryan had to pay his dues in the minor leagues.  The comic chronicles his struggles working his way up to get to the Mets. 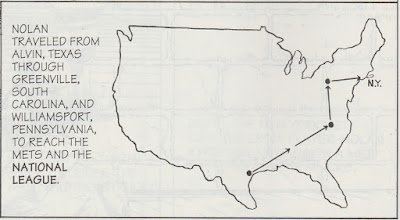 The struggle was only beginning once he made it to the majors.  He had to work through injuries to survive and attempt to thrive in the big leagues.  But the book also features personal highlights during the time. 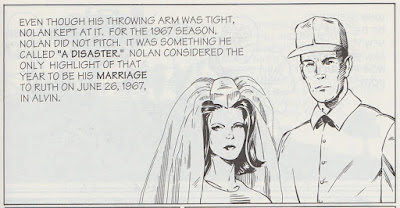 Once he got to California his career really started to thrive.  Batters started to fear facing him on the mound and he got his famous nickname:

The no hitters started and Ryan's reputation as an incredible talent was solidified.  It was time for his triumphant return to the Lone Star State with a position with the Houston Astros (which apparently came with large, cartoonish bags of cash!). 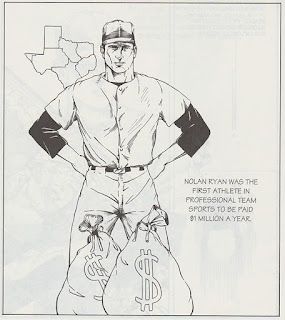 Soon came his 3,000th strikeout and then his 4,000th strikeout.  Records were breaking and stats were racking up.  Nolan's next move was closer to home as he joined the Texas Rangers, which he apparently celebrated by standing atop a mountain and posing: 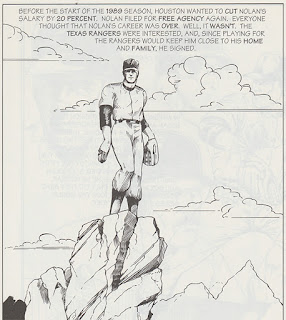 A quick mention is made of the Nolan Ryan Foundation Museum in Alvin but since the comic was published in the early 90's it was unable to include Ryan's time as the Ranger's CEO or as a beef pitchman.  Let's hope someone picks up where the now defunct comics company left off and we get a sequel!

Posted by Esteem Education Co. at 7:09 AM No comments:

Esteem Education Co.
Esteem Education Co, a non-profit 501 (c)(3) corporation, is dedicated to the production of science educational multimedia content and television programming, particularly in the realm of the earth sciences, including geology, geophysics, meteorology, geography, archaeology, and related fields of study. Esteem seeks to relate these academic studies to the lives of everyday viewers, and show how these topics effect our lifestyles and our environments.