1979 was a heck of a year.  From the introduction of the Happy Meal to the premier of the Dukes of Hazzard, the year was chock full of cultural touchstones.  Two fo the biggest at the time were The Love Boat and the Dallas Cowboy Cheerleaders...so it was only a matter of time before the inevitable happened:

Yes, not only did the Dallas Cowboy Cheerleaders guest star on the Love Boat, but they were featured in a two part episode right int he middle of sweeps!

The gals are aboard the Pacific Princess to perform at a charity show to benefit orphans or something.  And while they are there they a few of them get caught up in some romantic hijinks.  It is the Love Boat, after all... 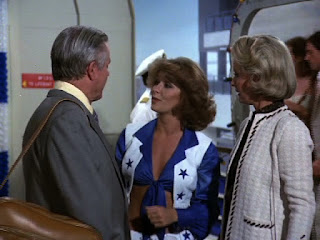 One of the stories involves Dallas Cowboy Cheerleader Wendy who's mother is getting married and is meeting her new stepfather for the first time.  The plot of this one involves the mother, Helen, thinking her fiancee and daughter share a mutual attraction and that they plan to run away together.  This is resolved by the two of them telling her it's not true...so I guess that's kind of a story, right?

Wendy is played by Gaye Carter, a real life Dallas Cowboy Cheerleader.  This seems to be her only acting credit and she now works in real estate.  So if you've always wanted to buy a house from a former member of the world's most famous cheer squad, then that seems to be an option now. 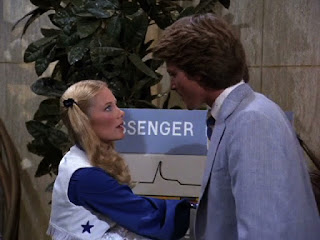 Another of the stories has another cheerleader, Stacy, being stalked by a guy whose only interest seems to be stalking her.  He bought a ticket to the cruise to be near her which seems like it would make this a dramatic subplot for the show but, no, it's played for laughs and those crazy kids end up together in the end.

Stacy is played by Tami Barber, another real life squad member.  She also played the recurring role of "Bev" on Dallas (the TV show, not the city) but, other than a few small roles here and there, that seems to be about it for her acting career.  I'm not sure if she made it to the real estate game or not.

Both gals did a great job and I was genuinely surprised to find out they weren't professional actors.  Other stories in the episode involved a jewel heist, a guy hiring actors to pretend to be his family and a sparring couple who realize they were meant for each other.  It was a busy cruise.  But enough of that, let's see the show!

Thanks for the memories, gals!  We'll see ya on the sidelines!

Posted by Explorer Multimedia Inc. at 12:14 PM No comments: