Mad About Dallas  - -  Mad About Walker

Everyone remembers Mad Magazine and their ruthless skewering of popular culture.  Many people may even remember Cracked Magazine, the shameless rip-off of Mad.  Fewer people may remember  the other scores of parody magazines that were looking to get caught up in the wave of Mad Magazine excitement (and maybe pick up some sales along the way). 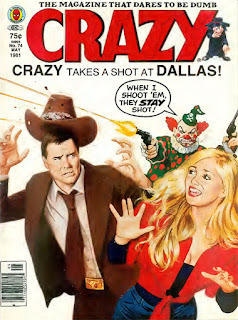 One of them, Crazy Magazine, was published by Marvel Comics and hung in there for a decade by making fun of the day's most popular movies and TV.  And nothing in 1981 was more popular than Dallas...which eventually saw itself in the Crazy cross hairs.

If you remember my blog entry from awhile back about the Mad Magazine Dallas parody, you'll notice some similarities, even down to the art style and panel layout: 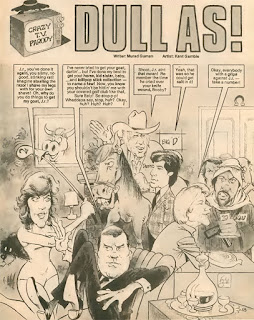 So you get the standard introductions of characters (and caricatures), with the theme for this "story" being that J.R. is out to get everybody and everybody is out to get J.R.  So what we get are several pages of J.R. being mean to people and those people trying to kill him.  If it ain't broke, don't fix it. 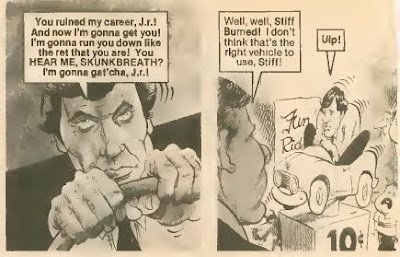 The caricatures are all pretty good with the exception of Cliff Barnes.  I don't know if it's the weird angles or if Ken Kercheval is just difficult to draw in general but I don't think the artist nailed it on this one.

J.R. continues his reign of terror against the Ewing clan, even going so far as to blackmail Jock for control of Ewing Oil.  And clearly Bobby isn't dealing well with the stress.  At this point how could J.R. top himself?  Is there no evil deed he wouldn't consider?

I guess we all knew J.R. is capable of quite a bit of mischief but destroying the world seems a little extreme.  I mean, I couldn't say for 100% that he wasn't capable of it...but I'm pretty sure.  Anyhoo, this little yarn ends with J.R. escaping the doomed earth in a rocket ship.  Once again, he comes out on top.

It's probably not the best parody you've ever seen but "Crazy Magazine" never really reached the heights that "Mad Magazine" did.  Still it's always nice to see a little piece of memorabilia from the Dallas TV juggernaut.

Posted by Explorer Multimedia Inc. at 2:30 PM No comments: