"Whip It" in Austin 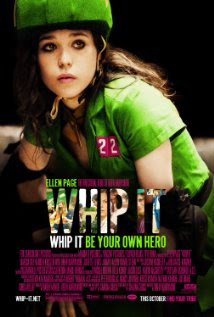 On a recent visit to Austin we made our usual visit to 6th Street.  Our first stop was The Museum of the Weird but now we're going a little farther down the street for some shooting locations from the roller derby movie "Whip It."

At one point in the film there's the standard "love montage" featuring Whip It Girl & Whip It Boy having fun at various places in Austin. Here, it looks like they just stopped by Roppolo's Pizza to have a slice and a quick piggy back ride:

Later they went down the street a few feet and took in a movie at The Alamo Drafthouse Cinema (which is one of the greatest movie theaters in the world despite the fact that they've never screened any of our films):

Here's a scene where Juno/Kitty Pryde/Whip It Girl gets off a bus in Austin. The location is on South Congress Avenue near Elizabeth Street and has some of the the Wacky Austin Shops™ in the background.

The most recognizable shop is Lucy in Disguise With Diamonds costume shop/clothing store/Wacky Austin Shop™.  As you may have noticed, it has a great big Carmen Miranda Zebra on the roof.

You can see downtown Austin in the background. Apparently a giant skyscraper was built after the filming of the movie but the rest of the skyline is relatively the same. You can see the Capitol Building in the middle.

Austin and the surrounding area have had plenty of films shot there (like Office Space) so hopefully I'll stumble across a few more the next time I'm down here.

Posted by Explorer Multimedia Inc. at 6:13 AM No comments:

We've seen that Marvel Comics has never been shy about visiting the Lone Star state but you might have noticed a lack of visitors from their "Distinguished Competition."  Sadly DC Comics never put out the kind of geographically specific freebie issues like Marvel did but they did come around from time to time.  Here's proof: 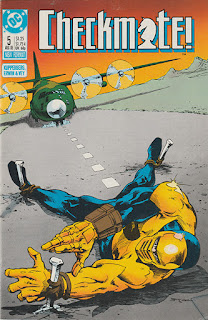 Ok, so it's not Superman or Batman.  It's not even the Teen Titans but we'll just have to make due.  Checkmate was/is one of DC's team of spies that mixes it up with both superheroes and foreign agents.  Their organizational structure is that of a game of chess.  Ranks include Kings, Queens, Bishops, Knights, etc.

They go about the business of espionage all over the world but when a quartet of mobsters are found dead in Big D, it's time for one of their agents to head to the Lone Star State: 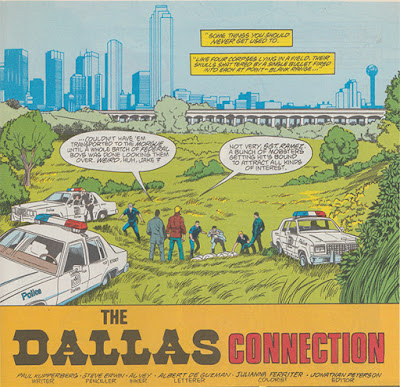 Checkmate dispatched one of their Knights (and former Texas Ranger) Jake Tyler.  After doing a little recon, he confirms his suspicions that local crime boss M.T. Cavanaugh is not only responsible but has much bigger plans in store. 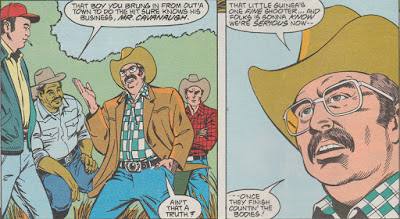 After doing a little research on Cavanaugh at the offices of the "Dallas Express" (which I assume is the Dallas equivalent to the Metropolis Daily Planet in the DC Universe), he finds out the identity of one of Cavanaugh's top lieutenants: Stan Allen who just happen to have dinner plan's at the city's swankiest restaurant.

Where would that be, you ask?  Why at the top of Reunion Tower of course.  So Tyler suited up and invited himself to dinner. 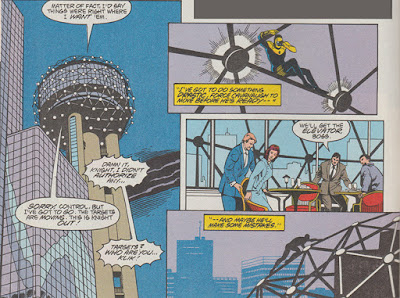 To make a medium-sized story short, after a failed attempt to pose as a local shakedown enforcer, Tyler is abducted by Cavanaugh's men and brought out to where the dirty deeds are done.  On a completely unrelated case, a Checkmate Pawn is staking out this oddly designated building:

If you check out the signage you'll see that this place is referred to as:
The narration just calls it "A Dallas Armory..."  Maybe that's a real thing?  I don't know.  Regardless, this is where Cavanaugh's men are stealing weapons for him to sell.  The Checkmate Pawn hops on one of the trucks they're stealing and shows up to the party right as Cavanaugh is conveniently explaining his evil plan: 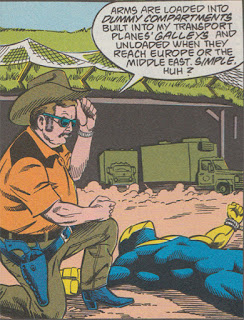 You'll notice that Tyler is tied down like he is on the  cover.  And if you think there's an airplane coming to squash him, just like on the cover, then you'd be right.

So the Pawn pops out of the truck he stowed away in, laments the fact that he doesn't get paid as much as a Knight, decides he's had just about enough of all of this, and then proceeds to open fire on ever everybody with one of the stolen weapons. 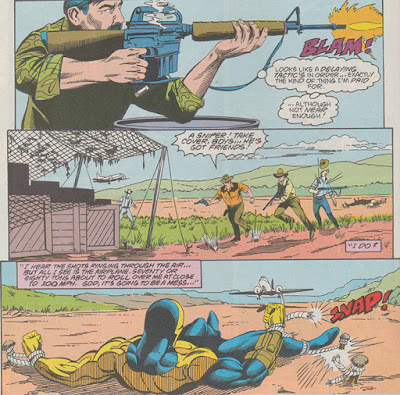 Pawny McGee also realizes that he is surrounded by stolen weapons and decides to be a bro by firing a rocket launcher at the approaching plane so his co-worker could avoid the impending squashing: 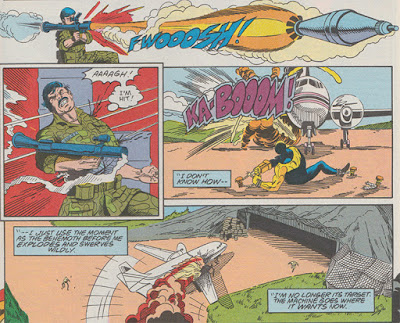 And as the plane goes off course, as you would expect, it heads right for the weapons cache and we get the big explosion that, let's face it, we all kind of needed.  And the only thing left to do was wink and quip: 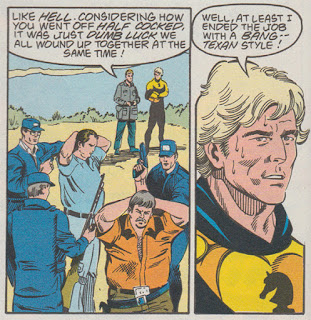 Top 5 Items for Sale at the Alamo Gift Shop

The first time you head south on I-45 to Houston you get a big wake up call when "the world's tallest statue of an American hero" pops out of nowhere to say "Howdy!"  The 67 foot tall Sam Houston statue in Huntsville is hidden by trees as you approach from the north and seems to appear out of nowhere (it's more visible from a distance when you approach from the south): 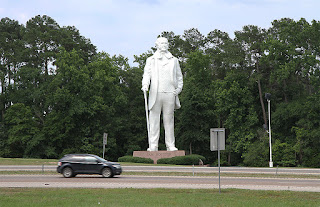 The statue has its own Visitor's Center and, you guessed it, gift shop.  So we pulled over and headed inside to do a little shopping and here's our Top 5 List of what we found: 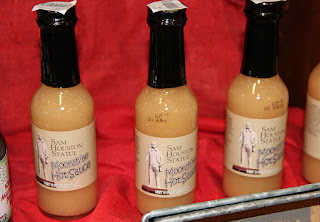 Yeah, I know that these types of gift shop food items all come from the the same place and just get custom labels but things little beauties still appeal to me.  I like knowing that if you wanted Sam Houston Statue branded hot sauce with a "moonshine" theme, then the world has provided you with that option. 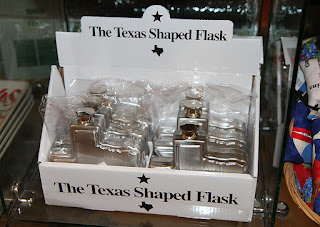 Texas has a unique shape which lends itself to merchandising like belt buckles or bolo ties but it never occurred to me that it would lend itself to a drinking apparatus.  But if you need an accessory for your secret drinking problem then you might as well get one that shows off your Texas pride. 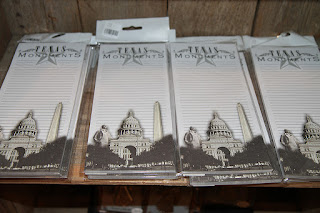 When jotting down your grocery list or your "Honey-Do" List it's important to be reminded that everything is bigger in Texas.  These handy pads show off the Sam Houston Statue, the State Capitol building and the San Jacinto Monument.  They're so big they don't leave a lot of room to write. 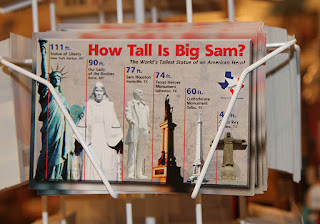 If you can't tell already, size matters in Texas.  And it REALLY matters in Huntsville, TX where a big claim to fame is "Big Sam."  On this card he lands smack in the middle between other statues in Texas and the United States.  You'll notice that the Dallas Zoo Giraffe statue is not listed since there's a little bit of controversy and possibly bad blood between the two Texas giants. 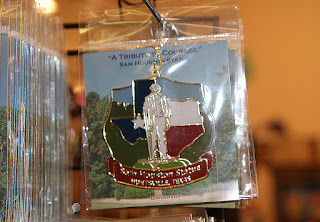 If you love the Sam Houston Statue as much as I do then you'll definitely want to incorporate it into the holidays.  This little guy would like great on the tree in between the J.R. Ewing ornament and the Big Tex ornament.  Pass the Hot Dr Pepper!

Posted by Explorer Multimedia Inc. at 2:19 PM No comments:

Not the Brightest Bulb (But Almost)

The sights and sounds (and, yes, smells) of the Fort Worth Stockyards are plentiful.  You've got Texas history, honkey tonks, cowboys (both real and rhinestone) and just about anything you could ask for to give the out of town visitors plenty of Texas take-home. 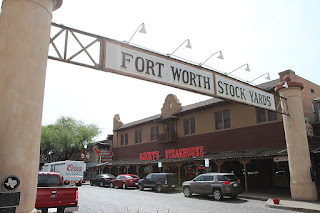 But among the meat packing memorabilia and cowpoke collections, in a dark little corner of the Stockyards Museum, shines a little known claim to fame.  Take a gander at this long lasting little beauty: 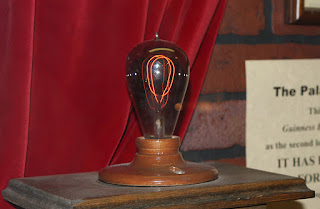 This little light of mine (and yours) is the world famous Palace Theater Light Bulb!  It burned bright, nonstop, for over a century.  Even when the Theater was scheduled to be destroyed in the 70's, it was saved and somehow moved (George Costanza/Frogger style?) while still plugged in. 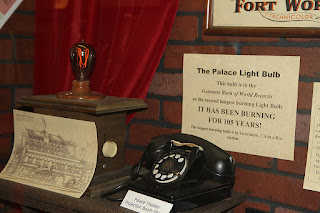 It holds the Guinness Book of World Records title as the Second Longest Burning Light Bulb.  Now I know that Texans aren't accustomed to second place but I'd like to think it has its own charm.  A charm that fits right in with the cast of characters in the Stockyards.  So the nest time you're in the neighborhood, stop by and bask in the light of history.

Posted by Explorer Multimedia Inc. at 9:43 AM No comments: