We've seen several comic book characters visit the Lone Star State over the years, especially the gang from DC and Marvel.  But it was only a matter of time before the kids from Archie Comics wanted to get their piece of the action...which brings us to 1991's Veronica #17. The story begins with Riverdale rich girl Veronica Lodge on a plane headed to DFW Airport to visit her father who is already there on business.  She passes the time by reading a paperback adventure of "Dusty Marlowe, Rodeo Star."  When a bit of turbulence gives her an old school, sitcomy konk on the head, naturally she gets the type of amnesia where you believe yourself to be the character you were just reading about...very common stuff.. 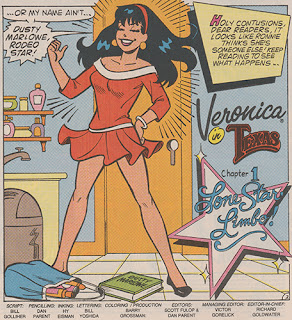 Armed with the confidence that comes with a brand new persona, Veronica (or "Dusty" as she now calls herself) then proceeds to lasso a wild bucking bull who was loose in the airport (They really gloss over the whole "bull is loose in an airport" element of the story) like a champ.

The bull's owners, father and son rodeo organizers, Harry and Matthew Chase, offer her a job in their rodeo which she promptly accepts.  They even seem to be okay with giving the amnesiac teenage girl they just met a ride in their truck.

One bottle of red hair dye later, Matthew starts laying on the charm by taking Veronica out to dinner at whatever the restaurant at the top of Reunion Tower was called in the early 90s.  Check out artist Dan Parent's take on the Dallas skyline:

The house style for Archie comics might seem somewhat simplistic but if you take a minute or two to examine the drawing above you'll see several details of the Dallas skyline were included and not just the obligatory Reunion Tower cameo.  At this point in the story we get into a tour of Texas landmarks.  Since we're starting in downtown Dallas, let's do some side-by-sides from that area:

One of the first sights is the JFK Memorial, a.k.a. the JFK Cenotaph which is unfortunately mostly covered by word balloon.  Making matters worse is that the Old Red Courthouse Museum is featured prominently in the panel but the artist didn't seem to have a good reference pic to work from so the resemblance is not very accurate.

Veronica notices that Dallas founder John Neely Bryan's log cabin was not necessarily matching its downtown Dallas surroundings.  The cabin has been moved around and refurbished several times over the years and always seems to get attention.  You may remember that a few years back another comic book tourist noticed it when Spider-Man teamed up with the Dallas Cowboys. 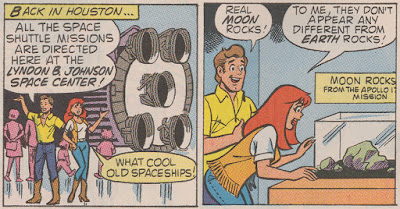 After a while it was time for the traveling rodeo to start traveling and it was southbound to Houston.  Amnesiac teenager "Veronica/Dusty" continued to tag along and nobody seemed too weirded out about it.  And the tour continued!  This time at NASA in Houston.

While all this is going on there's a few subplots in the story trying to keep the queso spicy.  One involves a pair of rodeo clowns planning to steal from the Chase Rodeo's box office.  Another involves Veronica's father hiring a private detective (who's always eating something for some reason) and Veronica's mother hiring a psychic (who, like all psychics, is faking it til she makes it) to track down their daughter.

And, of course, the tour continues!  This time it's a Texas history lesson at the San Jacinto Monument.  Either Veronica is genuinely interested or she's doing a great job of faking it.  But there's no time to bask in Texas Independence...it's time to head to Austin!

Like most tourists, one of the kids' first stops is the Capitol Building.  It's an impressive sight (and a great drawing) but I can't help but stare at the mustache bro who's looking right at the reader: 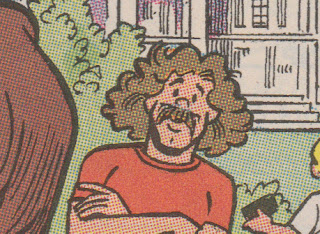 Yeah, this guy knows what's up.  He's got a secret...a dark secret.  But that's a story for another day.  Unfortunately, our fate is to continue following Veronica and Matthew on their tour of famous Texas sites:

The last stop on the tour was a quick swim at Hamilton Pool.  Looks like there wasn't a postcard handy for the artist to use as a reference because this one was a little off too.  The real thing is more of a grotto than what you'd think of as a traditional water fall but it was still pretty cool that a natural landmark was included in the issue.  Now all that's left is the wrap up. 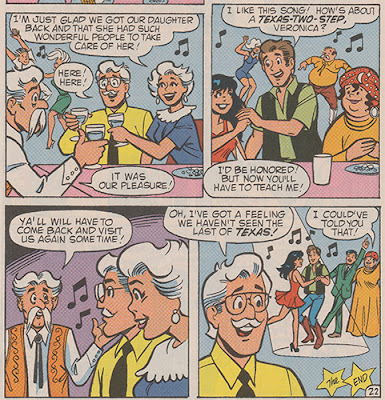 The rodeo clown robbers were foiled, Veronica got her memory back, her parents finally caught up with her and they all celebrated with some BBQ and some Texas two-stepping.  All in all, a pretty standard trip to Texas.

Posted by Explorer Multimedia Inc. at 11:47 AM No comments: