Lark in the Park

I'm not sure if Theodor Geisel, A.K.A. Dr. Seuss, had ever been to Texas but he clearly has a lot of fans in the state.  Particularly in the West Texas town of Abilene, known as the "Storybook Capital of Texas."   That's where you'll find Everman Park which is home to six sculptures of the good Doctor's most popular work.

Let's take a stroll in the park and see what we can see.  Starting with... 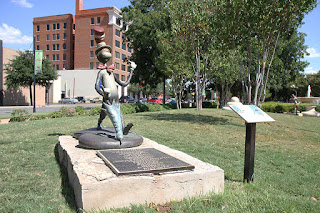 Perennial trouble maker and world's worst babysitter, The Cat in the Hat is the first sculpture in the park.  His book was first published in 1957 and he is easily Dr. Seuss' most popular creation. 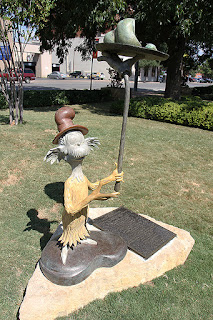 Next up is "Sam-I-Am" from "Green Eggs and Ham" which was published in 1960 and introduced a breakfast menu that kids all over the world would covet for years. 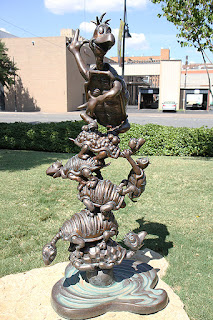 The Turtle Tower from "Yertle the Turtle and Other Stories" stands tall as the next sculpture on the tour.  The book was published in 1958.  It contained three stories but Yertle was clearly the break out star. 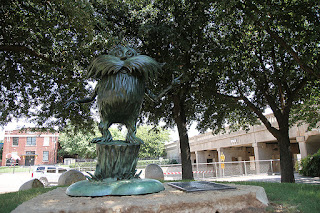 Appropriately, the Lorax stands surrounded by the trees for which he speaks.  The environmentally conscious character's book was published in 1971. 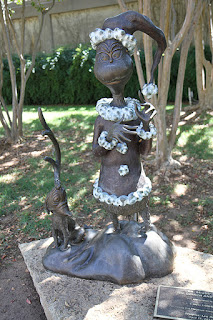 Seasons greetings are offered year round by the Grinch and his faithful dog Max.  Before the TV special, movie and merchandise onslaught, "How the Grinch Stole Christmas" was published in 1957. 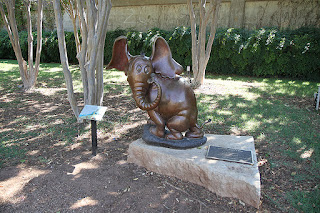 And finally there is Horton who is listening intently for all time to the tiniest of tiny friends.  His book "Horton Hears a Who!" was published in 1954.

All the sculptures were created by artist Leo Rijn and they fit in nicely in downtown Abilene.  The entire area is full of other whimsical works collectively known as the Storybook Sculpture Project.  It's worth a stop on your next West Texas road trip.  Don't forget to bring your camera.

Posted by Esteem Education Co. at 7:38 AM No comments: 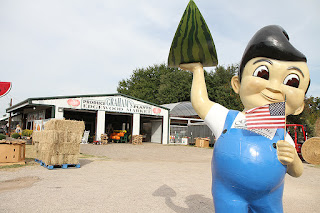 If you're in the mood for a healthy snack or some fresh ingredients for a new recipe then you're in luck.  The newest episode of East Texas Explorer features Graham's Edgewood Market in Edgewood, TX!

Posted by Esteem Education Co. at 8:46 AM No comments:

Esteem Education Co.
Esteem Education Co, a non-profit 501 (c)(3) corporation, is dedicated to the production of science educational multimedia content and television programming, particularly in the realm of the earth sciences, including geology, geophysics, meteorology, geography, archaeology, and related fields of study. Esteem seeks to relate these academic studies to the lives of everyday viewers, and show how these topics effect our lifestyles and our environments.